We’ve been lazy Elf on the Shelfers this year, and even without the extravagant costume changes and scenes our boys, especially my 5 year old, have loved having Wyatt here.  His excitement each morning as he searches for the new location keeps me motivated.  Some days I forget and wake in the middle of the night (usually due to a crying 3 year old) and move Wyatt from Shelf A. to Shelf B.  I’m OK with that.

Then a few nights ago my son did the CUTEST thing ever.  He grabbed paper and wrote a note to his elf.  It is pictured but unless you speak 5 year old you will need a translator.

I love you, so all the elves get together and take a picture.”

Then he went into the wrapping paper that we had out from earlier, and seeing the potential disaster, I helped him wrap the gift.  He added a tag, wrote the names, and aded a bow.  Then he went to where Wyatt was hanging from our fan that day and told him he had a gift for him to open when he could. 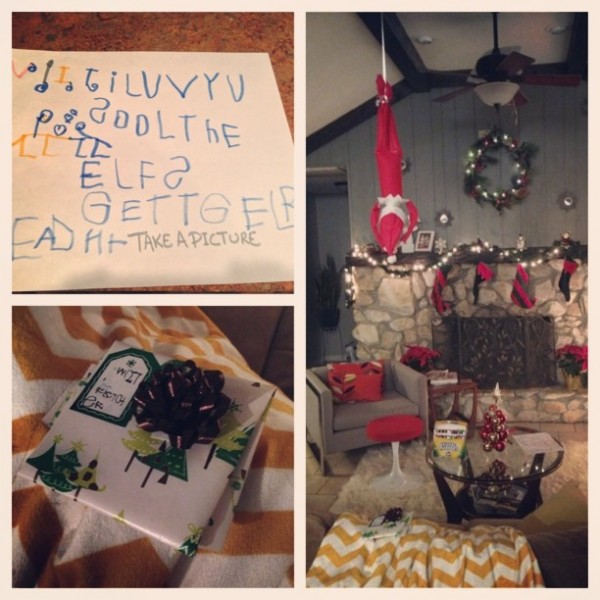 Being the photoshopping/photographing mom that I am I knew I could get off my lazy good for nothing elf butt and make this one happen for my son.  While the kids slept I took my elf to my “studio” with my green screen still up.  I used my elf and posed him a few ways that I thought might work together as a group.   I even added a tissue skirt to Wyatt and had him cross dress for a moment for a bit of gender diversity.  He has seen the movie and knows there are girl elves too! 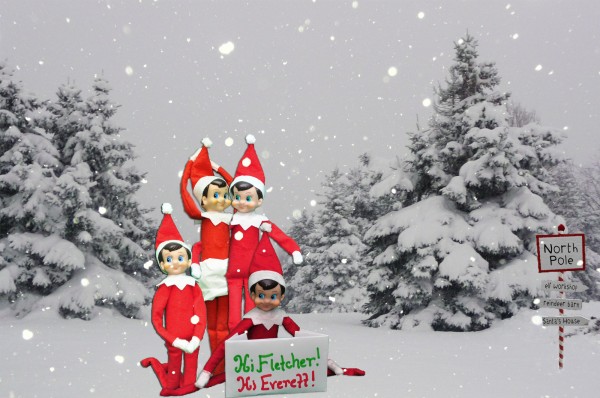 The resulting photo was printed and put into a spare frame I had.  Wyatt set up shop next to my vintage Super 8 and my husband’s old camera from high school for a fitting background.

That morning I followed my son around the house as he searched.  It took him a while to spot Wyatt in the corner.  I had to nudge him to get close enough to even see the 4×6 photo since he is so afraid of touching Wyatt.

“Oh look mom!  It is Wyatt and his family!”  Then he thought a minute and went to our living room.  There, he found the remnants of the gift wrapping.  “He got my letter mom!”  And it clicked.  Whew.

Was the extra effort worth it?  This time, YES!  Doing that every single night, NO.  Not everyone has a mini photo studio or Photoshop so I tell ya what.  You can totally download this photo.  Of course, there are different elves with different skin tones and hair/eyes.  Not to mention that my elf is from 3 years ago and the new ones look totally different.  If your elf doesn’t match this won’t exactly work, but just in case, here it is.  I changed the text to a generic version, or you can download the blank and write in your child(ren)’s name(s) on the note.  Tomorrow, Wyatt will be on a bookshelf somewhere but today I was Mom of the Year in elf world. 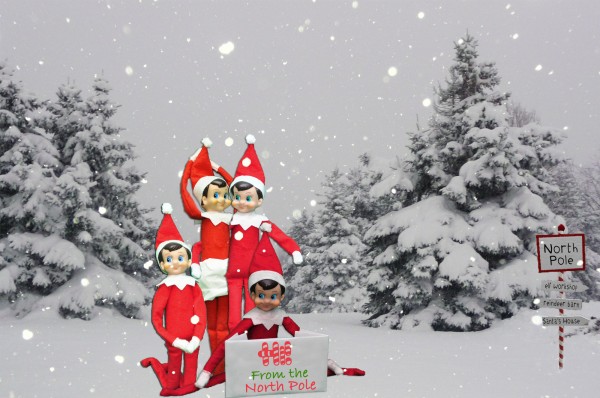 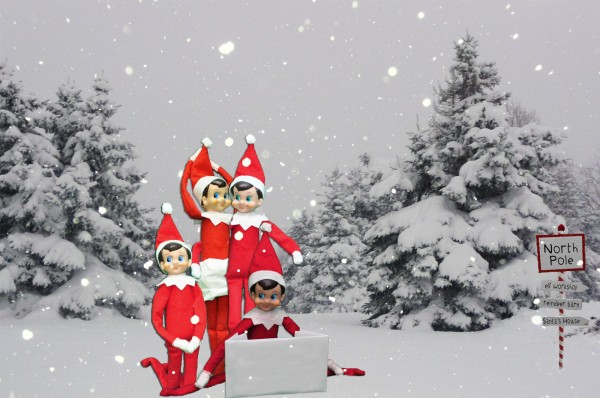 If you haven’t hacked your elf yet by adding wires to make him bendable here is my tutorial- Make your Elf on the Shelf Bendable and Grippy. It is the reason my elf is able to achieve those poses and not look like a lump.

Written By
Kim Rosas
More from Kim Rosas
Doopsy contacted me recently and asked if I would like to review...
Read More