Last year I revolutionized the Elf on the Shelf game with my tutorial to make him bendable like an action figure and grippy, enabling him to participate in far more antics and giving him a more lifelike appearance than the floppy doll-ness he came out of the box with.  Over 60,000 people so far have visited to learn how to hack their Elf and I’ve heard from a lot of happy customers how much fun they’ve with their new and improved Elf on the Shelf.

This year I wanted to finish what I started.  My original idea was to add magnets to the inside of my elf’s hands to make them stick together- but unable to find small and strong enough magnets for the job I used velcro instead.  Still, I kept thinking about how COOL it would be if Wyatt could have magnetic powers just for special occasions and without having to have another major surgery.

Introducing the Elf on the Shelf magnet mittens!

It really couldn’t be any easier but adding magnets to your elf requires that you already have velcro attached from the original hack.  If you just want to skip to adding magnets keep in mind that I have one hand with velcro hooks and one with loops so that they attach to one another.

Step 1: Choose your magnets wisely.  Elf on the Shelf elves have big heads and thus their bodies are heavy.  I happened to have an ancient bag of super strong dime sized magnets in my craft drawer.  Last year I tried buying the roll of magnets and this wasn’t strong enough plus it is expensive!  Because the magnets are not a permanent part of the elf the size and appearance isn’t much of a concern.  I would be safe and buy the big and strong ones for this exercise and not risk your child see his beloved elf slowly slide down your fridge in horror.

Step 2: Gather your supplies.  You will need Velcro in any color really (I already had black on hand), your magnets (2), hot glue and a glue gun, and scissors.  Most of you already have all but the magnets in your craft drawer.

Step 3: Hot glue the velcro to the magnets.  That’s it! 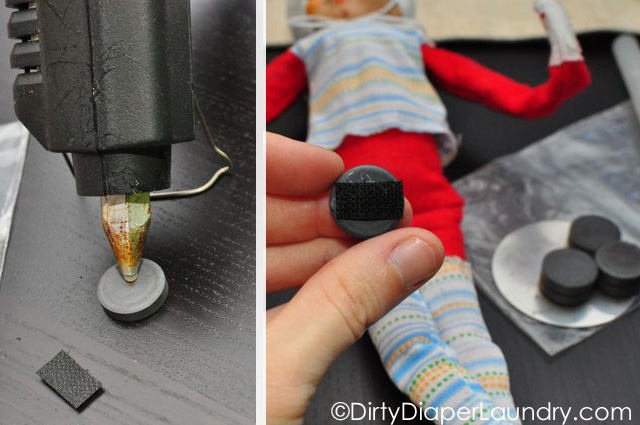 Now you can attach the magnets to your elf’s hands and let him hang from any metal surface!  Fridge’s are an obvious choice and I am sure your Elf on the Shelf can leave fun notes for your children, drawings, or even a recipe for Elf Treats.  If you survey your home you might find many other places he can use his new Spidey powers too!  The magnets aren’t as much of a game changer as adding the wires and velcro but they can definitely add more versatility to his powers and it only takes minutes to set him up with magnet mittens. 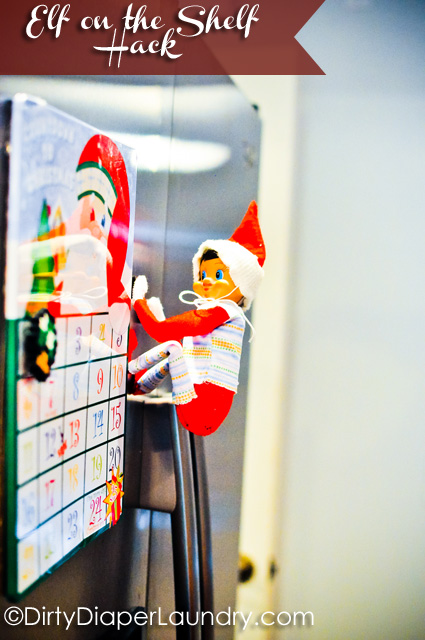 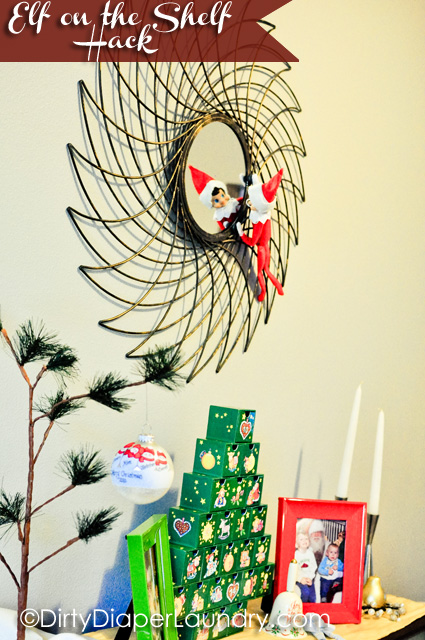 You might have also noticed that in some of the photos Wyatt the Elf is looking a little more authentic to the book with a festive pom-pom affixed to his hat.  I will quickly give you a run down on how to accessorize your elf.  It really adds to his appearance, I think!

I modified the bunny tail tutorial from Easter to make a simple yarn pom-pom.  I skipped the cardboard and just looped yarn up and down to where I had about 5-6 loops on top and bottom with the total length from tip to tip of the loops being about 3/4″.  If that is too small to work with you can make it longer and just trim the entire thing down to make it smaller.  It is more work after but less frustration to work with the short yarn.  While pinching the middle I tied regular thread (embroidery thread works too but yarn is too thick for the middle) in a knot around the center and pulled tight..  Next I snipped open the loops on both ends then trimmed any longer strings.  Fluff it by rolling it gently in between your palms and you have a tiny elf-sized pom-pom.

Next just sew it to the tip of the hat.  Done.  I already had the supplies at home but you can also easily buy a tiny pom-pom from the craft store although you would likely have to buy an entire baggie of pom-poms!  This also only took 5 minutes which includes making the pom-pom and sewing it on.

Lastly, in case you are wondering, my elf has one more accessory.  The edging from one of my white socks.  Originally this was for my Inappropriate Elf entry but I loved it so much I think it will stay all year.  If you happen to have a pair of lace or scalloped edge socks you too can make your Elf a bonnet.  Trim it and thread some ribbon or embroidery floss through each side then tie in a pretty bow under his/her chin.

Written By
Kim Rosas
More from Kim Rosas
Fitteds hold a weird spot in the cloth diaper world- not quite...
Read More