UPDATE 2015- CRG is no longer the owner of Fuzzibunz and Tereson Dupuy is back in charge.  Her new collection is available on Kelly’s Closet.

UPDATE 2014- Fuzzibunz was sold by Tereson Dupuy to CRG LLC who has re-vamped the line-up and marketing. They have changed the diapers to have a One Size Small and One Size Large and downsized from being sold at hundreds of retailers to just 5 for now, and are sold on their main website. The new diapers are being manufactured in China and the quality control has greatly improved compared to the last few years.  A review of their new products can be found here: http://dirtydiaperlaundry.com/first-look-at-the-new-one-size-fuzzibunz-improved-design-and-new-owners/

Shark Tank, the popular Primetime show where business owners look for investments in their companies from self-made millionaires and entrepreneurs, featured a familiar company last weekend.  Fuzzibunz, a company started in 2000 by Tereson Dupuy, went on the show to ask for $500,000 from the sharks and in return they would receive 15% stake in the company’s equity.  According to Tereson FuzziBunz sold 2.4 million dollars worth of product last year but the company’s proft was only $20,000.

Tereson’s appearance on the show stirred up a lot of conversation in the cloth diaper community.  Reactions were all over the map.  Overall it seemed people were thrilled to have cloth diapers (any brand) be seen on such a public platform.  You may recall that Applecheeks has also braved the sharks in the Canadian Dragon’s Den, of the same premise.  Then there were those who took the complete opposite stance and argued that being on television is bad for cloth diapers and might make them too “mainstream.”  I suppose those people are cloth diaper hipsters.

The controversy came down to the impassioned words of Tereson over the struggles FuzziBunz has faced.  Manufacturer issues and multiple moves to many countries in an attempt to keep up with demand, improve quality, and protect intellectual property have harmed their business.  The pocket diaper design with the leading edge all the way to the back (and other proprietary features) are the intellectual property of Tereson and she has a patent on these features.  When she told the sharks how many diapers are infringing on her design and that she is losing out on a lot of profit she spoke harshly.

On the show she uses the term “IP” Squatters.  Firstly, “IP” refers to “Intellectual Property” and that means- the patent on the pocket diaper.  Due to the fact that FuzziBunz holds the patent to a certain version of pocket (not all pocket diapers fall under her patent.  Several big brands have pockets dissimilar enough that they are not infringing on the patent.) cloth diaper manufacturers have to either a. use the same design and pay a yearly fee to FuzziBunz for that right.  b. Go around the patent by changing the pocket style.  c. ignore the patent and sell diapers anyways hoping not to be sued.  Note:  After this was posted Tereson updated her blog with a Q&A on patents.  My understanding of her patent was incorrect about the location of the pocket being part of the patent.  Read more here.

Tereson seems to be pointing the finger less at WAHM’s and brands who are following the legal channels and either pay the licensing fee or have their own pocket design that doesn’t infringe on her patent and more at the cloth diapers made in China that have either cloned her design illegally or are otherwise using her design.  I wrote an article about these generic relabeled cloth diapers found on Ebay and other websites that are virtually all the same but get a new label for resale to those who want clarification on this subject.  In addition there was an issue where a former employee created a new line of cloth diapers and used the same manufacturer as FuzziBunz.  The design was very similar and this caused a lot of drama between the companies and involved some retailers.  Things seem to have settled down now.  Another issue floating around has been about the “One Size Slotted Leg Elastic.”  While FuzziBunz has claimed to be the first with this innovation there were other brands to use the leg elastic sizing, and in particiular, slotted leg elastic.  The first has filed for and been granted a patent.  FuzziBunz stated, when asked, that they are seeking the patent on the “not sewn in” aspect of the slotted leg elastic, not the leg elastic sizing itself.

Of course there is still the question over whether or not Tereson Dupuy really invented the pocket diaper or if she merely was the first to patent it.  I do not have the answer to this question but the topic is still being debated (and causing drama) 12 years later.

The History of the Invention and Innovations of FuzziBunz Cloth Diapers

Let’s step back for a moment and visit some cloth diaper history.  I think it is easy to pass judgement from a 3 minute clip that has been edited for the best TV viewing but perhaps spelling out the long history of FuzziBunz, their manufacturing dilemmas, and the innovations they have brought to the market will help the average consumer.  FuzziBunz get a lot of credit for helping build the cloth diaper industry.

1999-Tereson files a provisional patent before even releasing their cloth diaper to the public.
2000-Tereson files formal patent application.
2000– FuzziBunz releases a cloth diaper with a pocket opening in the back.  The lining is fleece and so is the outside of the pocket.  Later on the fleece outer is replaced with waterproof PUL.  The original PUL FuzziBunz have pointy tabs.
2001– A patent is filed for a reusable cloth diaper with a pocket opening in the back by Tereson Dupuy.
2003– The pocket diaper patent for the “Stay Dry Pocket” is granted to Tereson.
2007– Fuzzibunz receive a facelift and come with larger, square tabs.  Diapers released in January 2008.
2009– The FuzziBunz One Size is released.  The rise adjustments are made using slotted leg elastic.  {video of the original One Size FuzziBunz}  Their original sized pocket diaper then became known as “Perfect Size.”
2010– FuzziBunz adds a hemp diaper to their line-up tha includes a hemp insert and comes in one color- vanilla.  Also introduces cloth diaper detergent.
2011– FuzziBunz unveils a new version of their One Size, now called FuzziBunz Elite, with improved leg elastic sizing anf minky inserts instead of microfiber inserts.  {video of the Fuzzibunz Elite}[/box]

For a little perspective keep in mind that before 1999 the biggest brand of cloth diapers was probably Mother-ease, which began selling in 1995 through mail order.  The biggest competing brand with Fuzzibunz today is bunGenius which was released in 2006.  Fuzzibunz had the pocket diaper market for a solid 6 years.

FuzziBunz cloth diapers have a large following of brand loyal individuals; they have also seen their fair share of critics.  Over the years there have been many documented cases of manufacturing issues that have left customers with faulty snaps, delaminating PUL, leg elastic that has stretched out long before it should, and various other problems that all go directly back to the factory that made the diapers. These customers haven’t been shy about the issues on cloth diaper and mommy messageboards either.

FuzziBunz have been made in various plants including facilities in the US (their original source for years) until they couldn’t keep up with the demand.  They started outsourcing to 3rd party manufacturers in 2006 including a NAFTA approved company in Mexico.   Lots of the diapers from Mexico had faults.

In 2007 production was moved again to Arkansas. This is when the square tab was introduced.  The quality was still an issue and that facility couldn’t keep up with demand.

Production was once again moved, this time to China, in 2008.  The quality improved overall however there were some known delamination issues (appears to have been one large batch) that were resolved.  They brought back the accessory line at this point.  They stayed in China until the end of 2010.

In 2011 FuzziBunz bagan manufacturing in Turkey.  This time they left not because of quality issues but because the plant began manufacturing a competing line of cloth diapers.  The move was to ensure no other new products or innovations henceforth would be exposed.  Reportedly production is planning to move back to the US.

To combat the past manufacturing problems FuzziBunz has recently instituted a “Lifetime Warranty” that protects the life of snaps and PUL.

As you can see, the life of a business has many ups and downs. Along with the manufacturing issues and patent wars Tereson went through a divorce during this time which caused issues as well since her former husband was involved in the business.  There is something to be said for a product that has lasted this long and still has a strong fan base.

Would you like to know my personal opinion of the Shark Tank episode?  I think the introduction was extremely strong and anyone watching would learn a great deal about the benefits of cloth diapers as a whole.  Tereson handled herself extremely well even when faced with harsh criticism of her business.  She also survived several bad “poo” puns by all the sharks.  I was, like many people, a bit put off by the criticisms of other pocket diapers and her claim that she is losing out on a giant chunk of the cloth diaper market.  Like others I am hoping she is not out to put others out of business but that she is just trying to protect her intellectual property.  I could feel the passion in her words and can relate.  I myself have been fired up a time or two when learning of other websites or blogs infringing on my ideas or posts.  When you love something it usually shows, even the ugly sides of it.  And what some people tend to forget is that cloth diapers are not just a movement: they are a business for thousands of people.  To the consumer and advocate it only matters that cloth diapers are being used.  They forget that there are real wages being earned that rely on the success of that brand.

My final thoughts: TV is edited for good TV.  Drama=Good TV.  Tereson was in front of the sharks way longer than shown.  They chose the sensational clips to air.

My final final thought: When women, who are also businesswomen, are shown doing just that and they speak on money matters, competition, and the like, other people call them names when their passion also leans towards aggression and competitiveness.  If a man does the same no one calls him names.

Please Note:  This article is not meant to defend or denounce FuzziBunz.  I am simply putting out the information available to me so that it can be in one place.  Everyone knows little bits and pieces but to my knowledge no one has documented the manufacturing issues and traced them back to their facilities.  I received information to help in this matter from Tereson to be completely accurate.  I feel she provided fair feedback on the timeline I produced by my own research.

Q&A On Patents Part 1 with Tereson

About cloth diaper patents and how they play a role in diaper design: Are Cloth Diapers Too Advanced?  Dirty Diaper Laundry 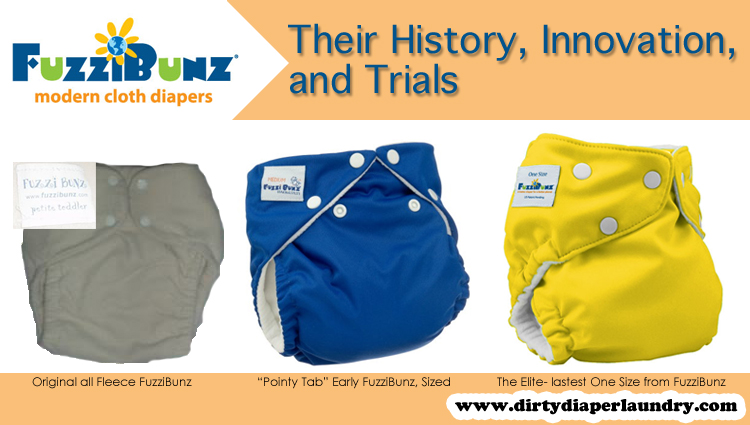