A few weeks ago I was particularly bored and trapped in the recliner as my 16.5 month old son napped on top of me.  With the clicker in hand I was determined to find something good on TV.  Shockingly, my DVR had nothing to offer.

I hit pay dirt when I saw Roseanne on Oxygen.  I tuned in and was immediately smiling at the reruns I had already seen but still loved.

I happened to be tuning in to season six, the one where Jackie gets knocked up by Fred and has a baby.

So imagine my surprise when I see this: 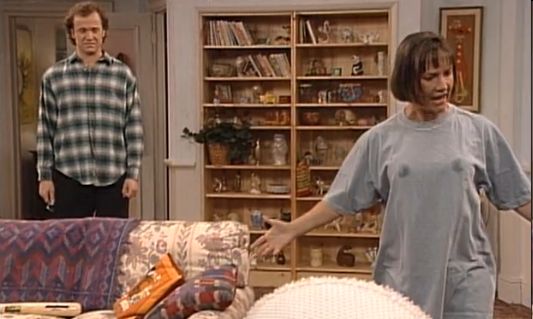 Even better, her boobs activated (or, lactivated, get it *snort*) when her baby began crying.  When have you ever seen leaking breasts on TV?  What a frank and honest look at breastfeeding.  I know some of you out there have had some funny and embarrassing (aren’t those two things usually combined) moments where your breasts leaked at the worst time.  It happens, we all have a chuckle, and we change.  I happen to be one of the lucky ones who only leaked in the very beginning when I was engorged.  But every time my son popped off a little too early and milk went squirting, I couldn’t help but laugh!

I thought it was even better that her milk let down because her baby was crying.  The writers on this show much have been breastfeeders, or married to one.

Towards the end of the episode Jackie is in her wedding gown, about to walk down the aisle.  Downstairs, her son Andy begins crying.  Uh oh.

But you know what the best part of the episode was?

She nursed her son while saying her vows.  Oh yes she did.

She had to switch sides right before she said “I do.”

I have always, always loved Roseanne.  This episode made me love it even more.  I was actually crying a little bit when she was nursing her baby in her wedding dress. Not so much because she was wearing a wedding dress, but because she was nursing her baby on a TV show.  She was doing it because it is what you do.  When you have a baby, you breastfeed.  When your baby is hungry, you nurse them.

Want to know something else?  Jackie coslept with her baby too!  Who knew there was such an AP mom on a 90’s sitcom!  Now if only there were breastfeeding mothers on today’s shows.  And ones who are having a positive experience and stick with it.  If you do see a mother nursing, she is cringing and complaining, then grabs a bottle and gives in.

Even on the reality shows like “Bringing Baby Home” the mothers mostly start out nursing their newborn.  They struggle, just like most mothers do.  Then they are shown six weeks later giving their baby a bottle almost every time.  Granted, there are exceptions.  I have seen one episode of a mother who was happily nursing her son months later and who spoke frankly of her trials and tribulations before she had it down pat.  Totally normal.  But those are the women we need to see; the ones who made it past the first 2 weeks, the first 2 months, and even *gasp* 6 months.  I am at 16.5 months and still going strong (while pregnant.)

I am thankful that organizations like Best For Babes are working to expel “Booby Traps” and put the word out that breastfeeding your baby saves lives.  Having positive female role models breastfeeding on TV and in Movies will help! I want to see another Jackie on a modern show, booby leaks and all!

Written By
Kim Rosas
More from Kim Rosas
Even though today is just another day, it also has the title...
Read More